Since the early 2000's, Dave Dunlay's house in Lyttelton has been slowly accruing many of Tandem's old equipment and memorabilia, either through his general interest or from becoming obselete and unusable to the crew. His garage is home to many bits of 'historical' technology, including computers, microphones and endless cables, so when we say he's dedicated to the business of audio and video production, we really mean it.

Recently Dave has turned up some old newspaper articles from the time of pre-earthquakes, which shine an interesting light of how Tandem grew to what it is today and how the world of podcasting started out.

Dave was interviewed in 2005 by the National Business Review in an article about the introduction of podcasting. The article claimed that "many internet observers sense another major media shift is afoot", which we can all agree has now definetly become the case as podcasts are now an everyday form of entertainment.

"The key now is to become familar with it, see who's interested in it...and to experiment with content".

In 2006, Dave was featured in the NZ Herald's discussing Tandem (then 'The Voice Booth') partnering up with some international media organisations to produce a new podcast series interviewing NZ's key politicians.

"With podcasting, we've got that Don Brash interview on our website available to download by anybody anywhere in the world for the entire election campaign," he says. "Kiwis anywhere around the globe can hear our political interviews."

'Dunlay is "blown away" by the interest in political podcasts and says the site has had more than 200,000 hits since August 12.' (just over a week after this article was published).

The rise in podcasting over the years has seen many more creators and genres coming to play in this area, which Tandem Studios continues to be a main leader of in New Zealand.

We've produced countless other podcasts since this article was released, including #Goodchat co-produced with 2 Degrees looking into how Kiwi's communicate, Ageing for Beginners with Dr Doug and Dave discussing how to age well, and most recently Canterbury Business: The Lowdown, chatting with some of Christchurch's key figures about the COVID-19 impact on the recovering city.

"Black Hands: The Bain Family Murders", co-produced by Tandem Studios and Stuff, continues to be one of the highest ranked podcasts in New Zealand, and was also number 1 in the UK during its release.

Tandem continues to produce all types of podcasts with our valued clients, now virtually while we can't be there in-person during the lockdown, something we would not have been able to do when this article was published!

It's always interesting to see how media progresses through time, no doubt we'll be looking back at this article in many years reviewing how things have changed again. 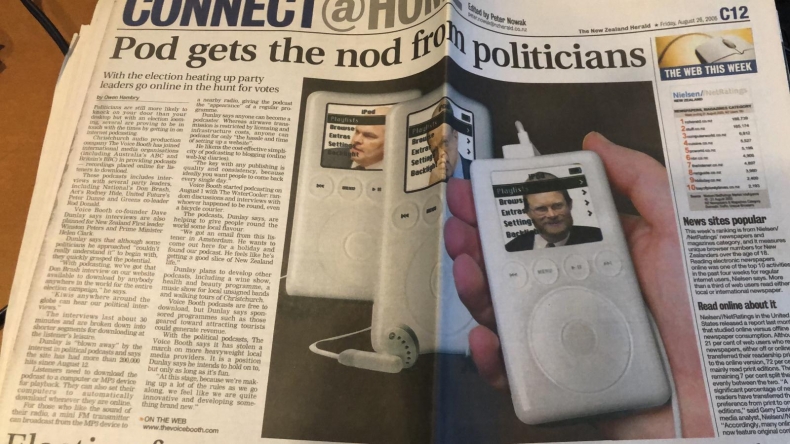 Easy, direct, instant and affordable, livestream to your audience with "Livestream Plug & Play". We...

One of the major industries that our economy relies on is hospitality. This episode, we chat to some local...

Tags Schools, Education
For over 10 years we've helped New Zealand schools and learning institutions promote themselves as a learning...

Tags Podcasting
Christchurch city centre has been through the wringer with the earthquakes and trying to get back on track...

One essential service that we sometimes forget about are the news media. They’re the ones who are bringing us...

Tags Podcasts
Since the early 2000's, Dave Dunlay's house in Lyttelton has been slowly accruing many of Tandem's old...

Tags Podcasting, Podcasts
A major theme in this podcast series is leadership. There's a daily challenge happening at the moment for...

Tags Podcasting, Podcasts
Christchurch NZ is in the business of promoting the beautiful Canterbury region, particularly Christchurch as...

Tags Podcasting, Podcasts
Our national rugby team may always seem calm and collected on the field, but most of this will be down to the...

Tags Podcasting, Podcasts
The fifth episode of the new podcast series "Canterbury Business - The Lowdown" has just been released....

How does Level 2 affect your event?

COVID-19 has brought a world of confusion and frustration to event organisers and content creators around the...

Tags Podcasting, Podcasts
It wouldn’t be a disaster in Canterbury without the Student Volunteer Army. Executive Director and...

Tags Podcasting, Podcasts
Current Mayor of Christchurch, Lianne Dalziel, joins us for the second episode of our new podcast series...